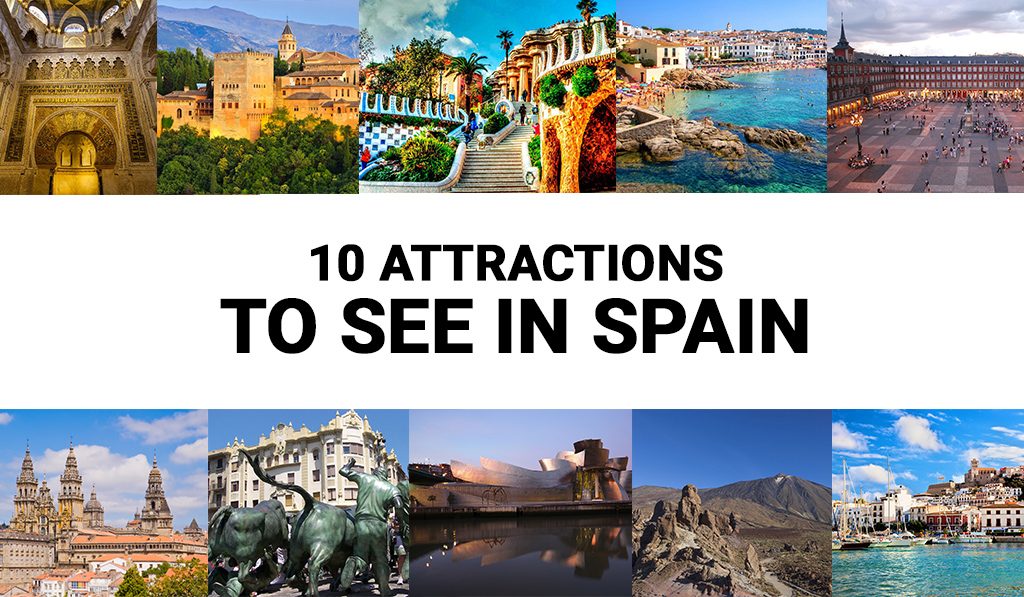 Spain, the country renowned for its weirdest and fun fiestas and festivals is the second largest country in Europe and Spanish is the second most widely spoken language in the world. The Kingdom of Spain is a parliamentary monarchy with King Felipe VI as the head of state. It is a developed and high-income country that is a member of various international organizations. The country has no laws about public nudity and has the second highest number of bars per inhabitants.

With more than 8000 beaches, vibrant nightlife, lively fiestas, 47 UNESCO world heritage sites, Spain is one of the most popular tourist destinations in the world. So, let us dive deep into the top 10 attractions to see in Spain.

1. The Great Mosque of Cordoba Cordoba, the capital of the Cordoba province, boasts the oldest man-made structure, the great mosque of Cordoba. The Islamic pilgrim built during the 8th Century reveals the glory and importance that Cordoba held during the medieval times. The mosque or Mezquita is now a Cathedral that has retained the original architecture which shows the Moorish influence on Southern Spain. The mesmerizing interiors and the architectural beauty make it a must visit attraction which is famous for The Hypostyle Hall.

2. The Alhambra and Generalife Gardens, Granada The picturesque Granada’s Alhambra palace is the highlight of Spain’s Islamic period when the Andalucia represented the epitome of culture and civilization in Europe’s Middle Ages. The Nasrid dynasty’s royal palace includes buildings, towers, walls, gardens, a mosque, stone carvings, filigrees, title-lined ceilings, arches and courtyards that will transform you into a fantasy of its own. The highlight is the Generalife’s terraced gardens that offer an exciting respite for its breathtaking beauty. Though Spain is admired for its diverse culture, the country also has attractions for crazy entertainment. The wonder park, Park Guell, is an artistic paradise where the designs are made of natural resources. It a must visit attraction for children famous for its Gaudi House Museum and is a major contributor to Spain tourism. The tour of Spain is incomplete without visiting the beaches and so Costa Brava should not, at any rate, be missed. One is completely taken aback by the beaches, landscapes and the tranquil villages that catch the eye of the beholder. The place is famous for its pleasant weather, various activities, games, local food, and the key attractions are the Art and Theatre Museum. The capital of Spain and its largest city, Madrid, is one of the attractions that can’t be avoided. It is cherished for its sizzling nightlife scene and colorful cosmopolitan cities. The Plaza mayor which is the heart of Madrid is a must-see attraction in Spain. It serves as the scene for festivals, important gatherings and street performers, and the hub for public transportation network. Here one can take in the serenity of the environment while sipping the luxurious Spanish wine. The key attraction here is the lively San Miguel Market.

The most visited attraction in Spain for the merrymakers is the pine-clad and sun-kissed island, Ibiza. Here one is captivated by the clubs, restaurants, coastlines and the secluded beaches which are perfect to have some private moments. The sunset scooter tour, clubbing, and the sun-and-sand parties will make the culture and lifestyle of the Spaniards grow on you. Although approximately 70 percent of the population is Roman Catholic, a very small percentage of them actually go to Church on Sundays and so the famous saying that football is the religion of Spain does ring true. But not visiting the Santiago De Compostela Cathedral will be a sin as here one gets to cherish an overwhelming pilgrim experience due to its breathtaking architecture of the Roman era. The key attraction is the St James relics famous for its façade and triple doorway, and 25th July is celebrated as the St James day, one of the top Spanish festivals. Pamplona, the capital of the Navarre region in northern Spain, is steeped in history with its neo-classical buildings, churches and medieval walls in every direction. The best time to visit this attraction is during the week-long festival of Fiesta de San Fermin when the Spaniards honor their patron saint. The festivities include brass bands, fireworks, and the most famous of all, the running of the bulls. The tradition of running in front the stampeding bulls is as dangerous as it sounds but is nonetheless a thrilling experience to watch. The most important architecture of its time designed by Frank Gehry is a must-see attraction in Spain. It has become the inspiration for contemporary architecture since it was inaugurated in 1997. The giant, curved, boat-like structure made of titanium and glass takes upon the city’s industrial and seafaring heritage and is an awe-inspiring attraction to visit. The tourist’s paradise and canvas for the photo lovers, the El Teide, Tenerife is a mountain range with a Volcano. The worldly landscape makes it’s a worthwhile attraction to see in Spain. The sunset point famous for its Teide National Park, more akin to Mars than Spain, is an ideal point for hiking.

The country which has produced some of the world’s greatest artists, is revered for its female entrepreneurs, is one of the world’s biggest producer of saffron, red wine, white wine, olive oil or as the Spaniards call it liquid gold, where the Spaniards believe in a full belly and a happy heart, where the people have more cars than cellphones and where the national anthem has no words is the country that  tops the bucket list of many tourists. Do check our website visafy.me for more information.