Top 10 Places To Visit In Belgium 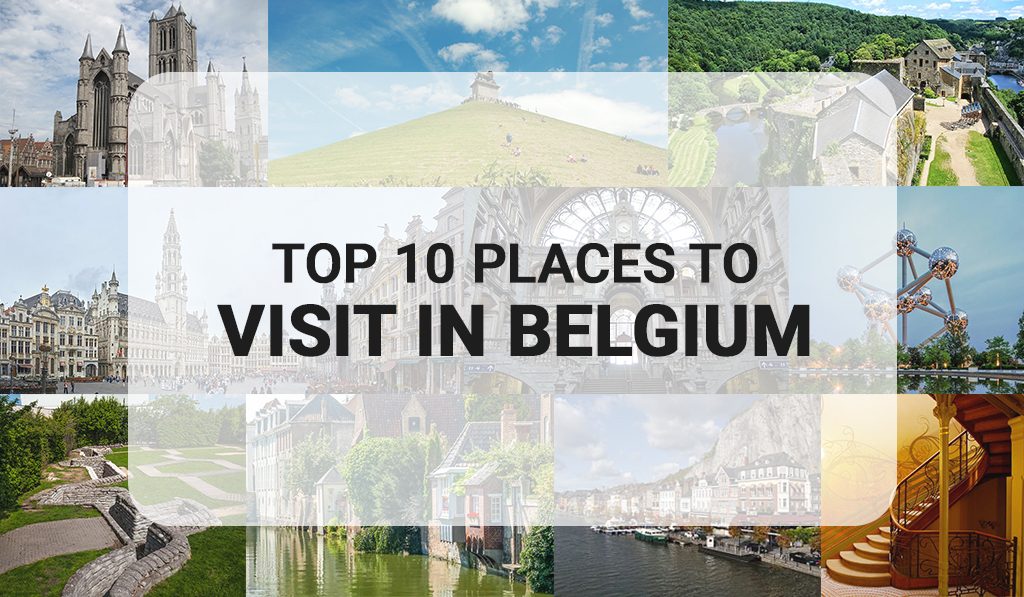 Located on the western end of the Northern European plain, Belgium is known for medieval towns and Renaissance structures and is surely a place to mark down on your travel to-do list. With a majority of Dutch/French-speaking population, the country also welcomes immigrants from around the world and is therefore rich with cultural diversity. German is recognized as one of the national languages there as well.

The flag of Belgium was adopted on 23rd January 1831 and is a tricolor of black, yellow and red laid down as three bands of vertical stripes. It was designed to signify Belgium’s recognition as an independent country. The three colors signify the country’s coat of arms, with black representing the shield; yellow the lion and red the lion’s claws and tongue. When we talk about the local time of Belgium, it follows the Central Eastern Time + 0100 UTC and is 4.5 hours behind India.

If Belgium as a country attracts you and you wish to get a visa for the same, the country offers 3 types of visas:

We also need to keep in mind the various documents that are required to apply for a visa for Belgium. One needs to keep in mind to carry with them their bank statement from the last 6 months, copies of valid passport and in case of Tourist or Business visa a letter mentioning the address and phone number of those they are planning to visit as well as their travel dates. Moreover in case of visa for some sort of medical treatment, one needs to have payment receipt of fees of their medical treatment handy. Other proof can include certificate/scholarship proof in cases of a student visa. The payment for the same can range from 160 euros for students traveling to study in public institutions or 215 euros for temporary authorization to stay in the country.

Further, Belgium adorns many beautiful sights worthy of tourist and local attention. Ranging from the Grand Place to the St. Peter’s Church and even the famous Horta Museum and various trendy marketplaces, Belgium has got it all covered. The country is full of awe-striking and wonderful places which one just can’t miss!

If we have to narrow down, 10 places as a must visit in the beautiful country of Belgium, it becomes a grave task. But the list includes the places that capture the culture and the diversity of Belgium and serves it in the best of the ways to the people who come from all over the world to witness it. Also infamously known as Grote Markt, it is the central square of Brussels. It measures 68 by 110 square meters and is a sight to behold. Surrounded by the City’s Town hall and the King’s House or the Breadhouse building that houses the Museum of the City of Brussels, the Grand Place is surely one place you can’t miss on your tour of Great Belgium. The Cathedral celebrates the rich religious architecture in Belgium and is Ghent’s most popular tourist spot. The building itself is quite majestic but many come to witness the artwork that adorns the inside of the Cathedral walls. Another thing to look out for is the crypt under the cathedral which houses great tombs and beautiful wall paintings. The Castle sits upon a hill overlooking the city of Bouillon and dates back to the 10th century. With three drawbridges, dungeons as well as a torture chamber that is the site of attention for many visitors, the Bouillon Castle is among the best Belgium has to offer. It also has a great defense system to protect from times of invasion. It is the main train station in Antwerp and is considered the best example of travel in Belgium as well as the most beautiful train station in the world. It was opened in 1905 and many years later, many trains including super-fast expresses continue to run from here.

5.The Battlefield of Flanders For all the war fanatics, Belgium’s role in World War I is the main reason for their visit there. Other than its historical significance, the Battlefield is also a major pilgrimage site. It is, therefore, a major attraction in Belgium. Surrounded by the river, it offers a great country-side experience to those who visit the beautiful Meuse Valley. Moreover, the cliff-top citadels and other historic sights add to the attraction of the place and it is one of the best spots for tourists to get a full feel of the country. Another spot of historical significance is where Napoleon was defeated in the famous battle of Waterloo. From the hill at the spot, one can see the stretch of lush green grass and a perfect view of the countryside. Due to the Canals, Bruges is infamously called the “Venice of the North”. In the earlier times, the canals helped traders to move around their product. Many tourists and even the locals come here to enjoy a beautiful boat ride and capture scenic pictures. The Atomium houses 9 giant steel balls connected with thin tubes and is Belgium’s ultimate symbol. The gravity-defying structure is a famous destination for tourists to visit when they are in the country. The awe-striking Atomium has a sure-shot place in the list of the best places that Belgium offers. Victor Horta, also known as the father of the Art Nouveau movement, has left Belgium dotted with various Townhouses that changed the way architecture was seen. The spectacular structures are sites to behold and are a must visit while in Belgium.

In case if one is planning to visit the beautiful country of Belgium, one must have the following numbers handy in case of an emergency-